Key West Florida is full of history. I recently stayed at a quaint bed and breakfast on Eaton Street, called The Knowles House. It was a lovely time, quite the paradise. When I returned back home I did a little history research on The Knowles House Family in Key West. Here is what I found. 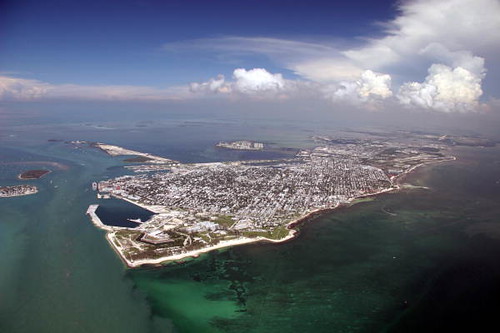 Photo by State Library and Archives of Florida

The branch of the Knowles family of Key West emigrated from the island of Eleuthera in the Bahamas. The Knowles family engaged in fishing and farming. The agricultural economy in the Bahamas declined in the early 10th century. Because of the decline many Bahamians looked for new opportunities in nearby places. Key West seemed like an attractive destination for many because of the islands booming maritime trade. Fishing, sponging and the growing cigar manufacturing lured many Bahamians to another part of the Caribbean, Key West Florida.

Family tradition maintains that the Knowles’ had previously lived in the American colonies in the 18th century, but remained loyal to Britain during the American Revolution and were forced to relocate to the Bahamas, where they received land grants from the British government as compensation for their loyalty to the crown, when their lands in America were confiscated.

Photo by State Library and Archives of Florida

The early Knowles’ worked in fishing, sponging and the cigar industry. By the later nineteenth century, David Knowles and his family were residing at Knowles House. David was a sponge fisherman and his house looked out across the open water that lapped up to the opposite side of Eaton Street. In the later 1880’s, the shallows across the road were filled and the present row of Victorian houses were built in the 1890s, depriving the Knowles family of its water view. David and his wife Rosa raised seven children in Knowles House. In 1909 David died leaving his widow alone to raise their younger children in the family homestead.

For many years Rosa lived in The Knowles House with her youngest child, Benjamin Rupert Knowles. Rupert was born in the house in 1896. Rupert began a wholesale business dealing in tropical fruit. In 1928 he met and married a young Swiss girl, Rosalie Weisser, known as Nancy. She was working as a nanny for a wealthy Miami family at the time they met at the Casa Marina Hotel in Key West. After their marriage, they continued living at Knowles House. Nancy and Rupert looked after Rupert’s aging mother, until her death in 1929. Rupert and Nancy had 3 children, Gene, Elizabeth Rose and Joan, all of whom were born in the Knowles house.

During the Great Depression, Rupert’s tropical fruit business failed and the family experienced hard times as economic conditions in Key West worsened. Just when things couldn’t be any worse, Rupert won the equivalent of $10,000 in the Cuban National Lottery in 1935. This economic boom enabled him to start a restaurant on Caroline Street near the bustling seaport. He also used some of the money to enlarge the family homestead, which had seen little change since its construction. The result transformed Knowles House to its present appearance and provided much needed space for his children.

Although 1935 brought good fortune to Rupert’s family, it also brought calamity to the Florida Keys in the form of the disastrous Labor Day Hurricane of 1935. Thousands of people died in the middle and upper keys, but Key West was spared the worst of the storm. Key West experienced torrential rains. Unfortunately, the storm coincided with the renovation of Knowles House at a time when the roof had been torn off to add the second story. The children remember their mother Nancy sweeping the rain water out the front door as it cascaded like a water fall down the stairs. In spite of this setback, the remodeling of the house was successfully completed and the family enjoyed many happy years in the old homestead

As Rupert and Nancy’s children grew up and married, they all left Key West, settling in other parts of the country. Rupert died in 1961. Nancy Knowles lived on in the family house alone until her death in 1983. After their mother’s death, the children sold the house out of the family. After several intervening owners, each of whom made improvements to the property, the present owners, Les Vollmert and Paul Masse bought it in December of 1996. After further improvements and enlargements, they have continued to operate it as the Knowles House Bed and Breakfast Inn located in Key West Florida.

This adult-only, restored 1800’s conch house in Key West features a rooftop sundeck. It is only 5 blocks from Duval Street and each room is uniquely decorated and includes a fridge.

Mallory Square and the Sunset Celebration is a 17-minute walk from the Knowles House B&B. The ferry terminal to Ft. Myers and Marco Island is 2 blocks away.

>> This plugin does not support adding widgets via the wordpress appearance menu. To use this plugin, please add the widgets within your posts, by adding new blocks. <<